Tick-tock- plaster ceilings in the tri-state are collapsing....could yours be next?

Plaster ceilings are normally found in older homes.
In the Cincinnati Tri-state area we have no shortage of them. With older historic homes and buildings plentiful,  there common place.
Before the advent of drywall panels the process to create a intetior wall was a lot more complex than making a few drywall cuts and screwing a board on to studs.
Tradesman at the turn of last century to create walls and ceilings had to hang metal lathe or install wood lathe over wall or ceiling joist to give their plaster compound something to grab ahold of .
The former is a chicken wire looking material with tighter closer holes that could catch and hold plaster. The latter essentially was the installing of thin pieces of wood with a small spacing in-between each piece. The plaster would ooze through the spaces in both examples and then harden on the back side grabbing the substrate and leaving a hard scratch layer of plaster present that subsequent layers could be applied to untill the wall was finally finished. It was alot of work.
However a critical mistake was made , one that they could have never predicted would in time cause problems. And I think depending on the time frame, one that there was no way to prevent.
See it was common place back then for the plaster workers to hang the lathe with nails. Not a big deal at the time. And still to this day not a problem very often on walls.
However,  ceilings are a different story. Over the time span of 100 years the weight of the plaster hanging upside-down from ceiling joist has begun to pull the nails from the joist.
The result = collapse with little or no warning.
This is a big problem 😬❗
Plaster is heavy, extremely heavy.  When one of these ceilings collapse they can kill or seriously injure any living creature that's under them.....
Moms, Dads, children,  grandma, grandpa, the dog, the cat
None are exempt.
And for some families,  they never see this silent killer coming untill it is too late.
If you have a plaster ceiling, I reccomend you have it inspected atleast annually.
And really at this point in the game. I feel it is safer for everyone to either professionally have them covered correctly and encapsulated.  Or removed all together.
You say this is exaggerated,  and does not happen normally ❓
It happens with extreme frequency in the Tri-state every year.
Better safe than sorry❗
The stage is set, plaster ceilings are pulling on the 100 + year nails that are corroding and pulling out daily. One gives way and the weight of the ceiling it was holding then shifts to the ones left. And then eventaully the weight becomes too much ...
The stage is set. .........
It is up too us , the tradesman , us contractors to get them covered or removed. Before the play - plays out.
Are clients need to wake up and understand that at this point ,it is time. Another moment may be the last.
Anthony Ford
ExtraPrep Pro Painting LLC
Http://www.extrapreppro.com
(859-815-0652
lathe and plaster ceiling failure old ceiling collapse plaster ceiling collapse cincinnati northern kentucky tristate plaster ceiling fallen

Popular posts from this blog

If your deck boards have a bunch of goo and what looks like sap coming out of them . Your not alone❗   I want you to know that it is called "pitch" - your deck boards have  "pitch".  The goo or " pitch " is usually generically called by most people in my kneck of the woods - "sap".  "Sap" comes from a live tree.  The difference is - "pitch" is the correct terminology to use once the wood is dead.  The reason for this- I did not dig that deep into the subject if I'm being honest ❗😁 I can however shed some light on why it happens.      Typically premium lumber is sent through a process that solidifies this goo down inside the board and that solidification keeps it from ever coming to the surface .  In fact this is one of the major reasons we treat our lumber.  But just like in every industry and every production process. You will have a few that get through with less than stellar treatment.   If they catch them , maybe
Read more 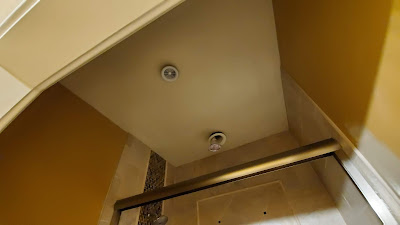 Today I finished the Bathroom ceiling REPLACEMENT And Painting job in Union, Kentucky.     Here is a Picture of the final product.  Tough day, unfortunately the homeowners were in a hurry to leave for the evening and I forgot to take  pictures of the bathroom that I completely repainted as well. 🎨🙄  This was additional work from my "Liquid Ceiling" basement painting project. So this was just kind of a small add on project.  💎💎❗❗❗💎💎💎❗❗💎💎❗❗💎❗💎💎         Lets talk about why I had to refinish this ceiling anyways...  Mildew Growth.......       If this is your first time on my blog and you didnt read the post directly before this. Then this blog post will maybe not make sense too you. Go read it -  Here  ..........     MILDEW Growth had overtaken this bathroom ceiling.     So badly that it was abated. (Removed)  This is not uncommon. Although it is possible to clean and remove and or safely cover mildew. For whatever reason th
Read more

Why You Should Paint Your Unfinished Ceiling 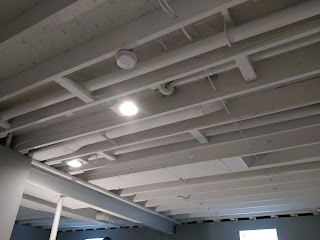 The Dreaded ugly ‘ Unfinished Basement Ceiling’. Many Homeowners and Business Owners alike have had to face the decision and weigh the options available to finish these eye soars. And the options to finish these are endless, there exist so many ceiling systems out there _ It is almost a endless supply of options. Traditional Finishing with drywall and then painting is without a doubt the most common way to get the job done. Then you also have drop ceilings with a variety of materials from ugly foam tiles to elaborate silver and gold plated tiles and everything in between. Don't forget about all the Specialty hybrid and miracle solutions sold by various Companies and Contractors Nationwide. ✳✳✳✳🔼🔼🔼🔼✳✳✳✳✳🔼🔼🔼🔼✳✳✳ In this Blog Post I'm Going to tell you about a option you may not be considering. And probably should! I'll admit I may be a bit biased being a professional painter. However I feel I can make a strong Case for this Option. Im t
Read more